To be successful, startups need to know how to fail early and fail fast, work with prototypes, engage in a lot of testing and a rapid iterative cycle of planning, doing, testing, assessing/learning and planning again.  They need to be agile.  They need to make decisions very quickly about a myriad of issues.

In that sense, they can benefit from knowledge management if they adopt practices that will support improved decision making based on rapid organizational learning. You don't conduct After-Action-Reviews or their equivalent every year, you incorporate an element of "pausing to learn" in every weekly core staff meeting and you make it a practice that gets disseminate as the organization expands so that it becomes part of the organizational culture.

In addition, startups are, by definition, small and immature organizations.  They may lack organizational structures and governance because as long as they are small, they can get away with having very little formal structure.  That may be exactly what is needed at that early stage of organizational development, but if they look ahead and think in terms of increasing maturity, they will want to pay attention to the inevitable emergence of organizational silos and preemptively set up information and knowledge structures and governance to ensure continuous knowledge sharing across the organization as it grows and evolves. Creating teams and giving them autonomy to go do what they do best is great but they will tend to go off and reinvent the wheel if they are allowed to, resulting in a multiplicity of tools, duplication of resources, proliferation of intranets and overlapping discussion forums, none of which will be integrated within a global vision of where the organization's knowledge resides and who to leverage it for the organization's benefit.

The following string of thoughts comes out of recent readings and meetings.  As always, more questions to ask than answers to provide.

I am inclined to think (or hypothesize) that learning MORE is a very incremental process whereas learning BETTER is potentially an exponential process.  I don't really want to use the word "exponential" here and I certainly don't want to use the word "transformational".  What I mean is that learning BETTER, addressing the qualitative dimension of learning is potentially more impactful than learning MORE.

It's the difference between the idea of continuous learning, which is simply about learning more over time, and the idea of learning HOW to learn, which is about becoming a better learner.

This manifests itself currently for me in terms of something as simple as reading.  The number of books I will read this year is somewhat irrelevant.  I am much more interested in developing, nurturing my capacity to engage in deep reading and deeper learning.  There is some tension there because I could benefit from reading more broadly, which might translate into more books.  The compromise might be scanning more books from a broad spectrum of disciplines but reading deeply a smaller subset of those books. 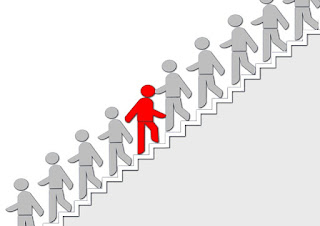